The Brand LIBERTY came into existence in 1960. It is one of the most cherished and renowned name in Audio Visual Industry. Later, the company AV-Vision was created by Mr Sanjay Jain Deen Dayal in 1997, who proudly cherishes his ancestral lineage from his Great Great Grandfather Shri Lala Deen Dayal (1844-1905), the eminent / doyen of Indian photographers of Princely States and British India.
Raja Deen Dayal was also known as, ‘Prince of photographers’, ‘Raja of Images’, ‘Bold Warrior of Photography’. His career began in the mid-1870s as a commissioned photographer. Eventually, he became the official photographer of the court of the Sixth Nizam of Hyderabad, Mahboob Ali Pasha, Asif Jah VI, who awarded him the unique title Musawwir Jung Raja Bahadur in 1892. He was then appointed as the photographer of the Viceroy of India in 1885. He received the Royal Warrant from Queen Victoria in 1897.
Sanjay is the 5th generation descendant of Raja Deen Dayal who was deeply influenced by the works of his Great Great Grandfather who indeed was a scion of Imaging.
Sanjay inherited the interest and the skill of Imaging, which he used for establishing his company, i.e today’s Liberty AV-Vision Equipment’s (India) Pvt. Ltd. He has a very broad vision for the future of his Company in the Audio Visual Industry which is mainly to achieve its country-wide presence.
Lets us have a look at Raja Deen Dayal’s varied images of sheer brilliance. His commendable work of Art in the form of the portraits, is of such great quality that even in this digital age many photographers can not match them. 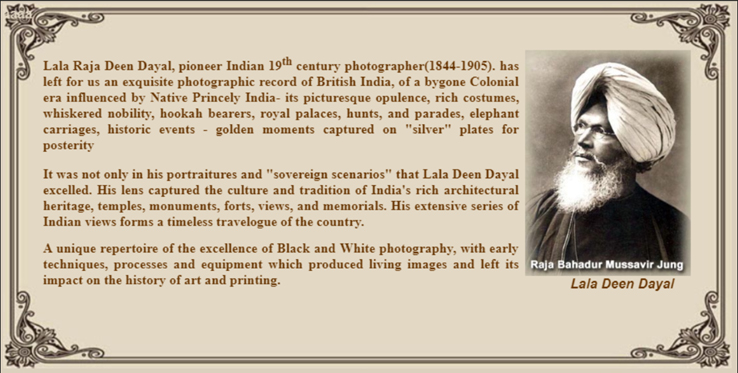